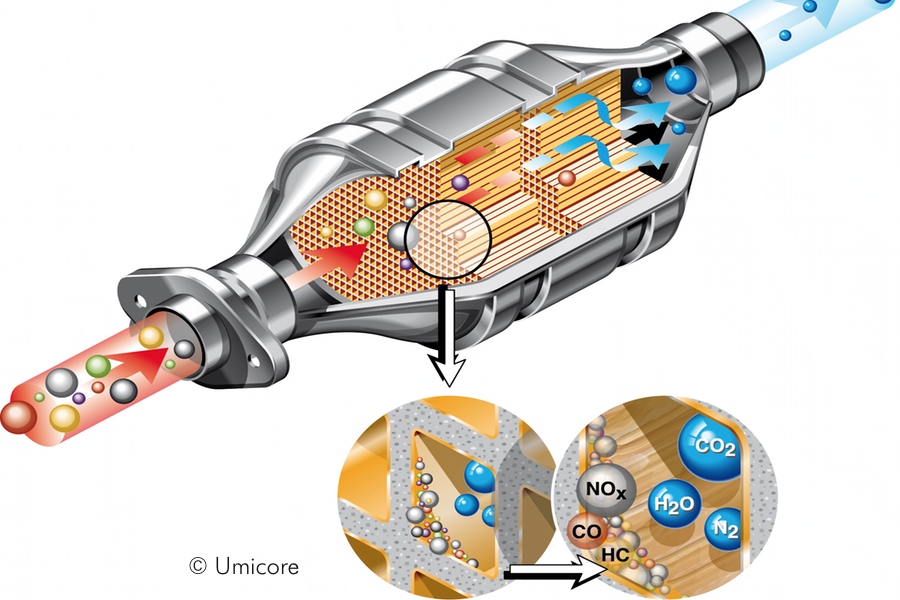 What is an autocatalyst?

An autocatalyst is a cylinder or elliptical cross section made from ceramic or metal formed into a fine honeycomb and coated with a solution of chemicals and a combination of platinum, rhodium and/or palladium. It is mounted inside a stainless steel canister (the whole assembly is called a catalytic converter) and installed in a vehicle's exhaust line where it converts pollutants from the combustion of fuel into harmless gases.

In a catalyst system for gasoline engines, as exhaust passes through the device, the autocatalyst converts gaseous HC, CO and NOx into water, CO2 and nitrogen. A catalyst system for diesel engines additionally employs a filter to eliminate fine particulates (soot) which are a significant cause of lung and cardiovascular disease. The filter traps these particulates and is usually coated with PGMs to help to burn them off and regenerate the filter.

Diesel engines operate at lower temperatures than gasoline engines and run with a leaner gas stream containing lots of oxygen. Under these conditions platinum is a more active catalyst for the conversion of CO and hydrocarbons to harmless emissions. However, the addition of some palladium to the platinum catalyst can improve its thermal stability. This is an advantage when reducing diesel particulate matter from the exhaust. This process involves trapping the PM, or soot, in a filter and then raising the temperature of the system to oxidise the soot to CO2. At these higher temperatures palladium improves the thermal durability of the catalyst, helping it perform optimally for the lifetime of the vehicle.

Without PGMs, the desired conversion reactions in the catalytic converter would not take place, resulting in the vehicle not meeting the emissions regulations. Other materials have been tried, but have not met the long term activity and durability requirements of modern-day emission control systems.

The activity of the PGMs enables the reactions to occur at low temperature conditions that exist during cold starting of a vehicle, when emissions are at their highest. Durability is important since catalytic converters need to perform over the life of the vehicle. It also means that when an automobile is scrapped the precious metal contained in the catalytic converter is available for recycling, creating a valuable supplementary source to mining for the production of new autocatalysts.